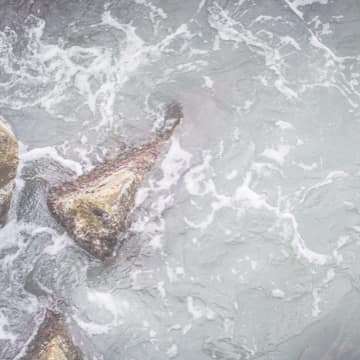 Well, if this week isn’t proof that every cloud has a silver lining, I’m not sure what is. Turns out when you roll with the punches, whilst flying by the seat of your pants and taking every day as it comes – good sh*t happens. Enough cheesy cliches for you? How about we throw in always looking on the bright side of life? Okay, that’ll do. Onto the story of a week of going it alone, and a knee injury detour …
SEATTLE
“So Anna, what do you know about Seattle?” my first host asked. I took a deep breath. “Well. (sod it, in for a penny) … I’ve watched a lot of Fraiser, and 10 Things I Hate About You is my favourite film.” I exhaled. How did I do? Terribly. Actually Seattle isn’t too far from how I imagined it. Great downtown, stunning skyline and an abundance of waterfront restaurants serving up the days catch. There are some added extras too – friendly neighbourhoods, beaches with killer sunsets and, for the cycle geek in all of us, extensive and impressive bike trails. Riding on them I had that ‘legal alien’ feeling – when you’re clearly not following the unspoken rules and play, and think a local is going to stop at any second and scream “TOURIST!” in your face. THE REAL AMERICA?
Anyone who knows me will attest that I’m terrible at ‘not doing’. I really do hate sodding rest. So after 2 days in Seattle, with the knee still feeling a wee bit cheeky, I decided it was time to roll out again. The new twist being that Lydia had gone on down the coast, and I was going it alone
inland.
Heading South through Washington, I got my first glimpse at a bit of real America. I say ‘real’ and I mean where and how huge proportion of the population actually live. Not in cities, or even suburbs, but smack bang out in the countryside. I was struck by the contrast on display. Some houses were immaculate. Beautifully kept lawns, neatly finished paintwork, fenced off fields and flower beds that’d make Alan Titchmarsh’s eyes water. The rest were a polar opposite. There were yards filled with odd trinkets, upturned faded tricycles, rusty caravans, and battered American flags flapping limply at the end of driveways. My initial reaction was that these weren’t the kind of houses that I’d go to in search of a cup of sugar. I’ve no doubt they’re full of lovely people, but call it movie brainwashing, or plain ignorance on my part – these were the types of houses from which someone would emerge wielding a shotgun, any minute…. now. The barking rabies esc dogs outside many of them didn’t do much to dispel my beliefs either. WASHINGTON’S BEEF
As I pedalled South, through misty mountain passes to more open plains, it became clear that ‘we’ had a problem. Washington didn’t want me to leave (it happens). Rather than expressing this through a sensible State-to-Woman conversation, it decided to throw anything and everything in my path. It dispatched a Devil dog to chase me – the type of chasing where you’re forced on to the other side of the road to avoid snarling jaws at your ankles. It summoned magical forces to split my front tyre – thank goodness for gaffa tape and an old toothpaste tube. And lastly, it landed a rather long 20% hill in my path. Normally tricky, but when you only have one truly functioning leg and you’re riding unclipped on flat plastic pedals with a 20kg load – double tricky.
PORTLAND
At long last I made it within sight of the Oregon border. Excellent, I thought, I just need to nip into the city now. Fool. Although it may be the bicycle capital of the US, Portland is a not a city designed go be cycled into. In fact, I’m wondering whether any city in the US Is going to be. I’ll report back on that one. With 8 bridges and 3 highways it’s officially the room of requirement – getting in is an absolute frigging nightmare, but make it to the other side and there lies everything you ever dreamed of.
I was only there for 2 days and I fell a little bit in love with the place. Possibly something to do with my hosts being the nicest people on the planet, and the iconic ‘Cyclepedia’ exhibition happening to be in town, but there was more to it than that. The neighbourhoods are a melting pot of funky bars, bijou art galleries and bustling markets. It has the feel of a movie set, and everyone just looks …. happy. To top it off, Portland is a city that prides itself on beer, bikes and coffee. Win. Win. Win.
THE WELL OF KINDNESS
Time for McNuff’s reflection of the week (yes I just referred to myself in the 3rd person, no don’t try this at home). Being alone this week, the thing that’s struck me most is how much you rely on the kindness of complete strangers to skip your days along. In my head this manifests as a little well. So long as the level of lovely-jubly-ness in that there well is enough for me to dip my big ole bucket in when times get tough – then I think I’ll always be just grand. On Wednesday it was Cindy at the gas station – I went in to buy a can of beans, and left with a big hug and spare matches. On Thursday it was the family who let me camp in their back garden, after the campsite I was headed to turned out to be some kind of serial killer looking commune. On Friday it was the construction workers who stopped the massive machines to let me through a closed road, and saved me a 30 mile detour. And on Saturday it was Wiley, selling tickets outside the soccer stadium and promising to throw in a prayer for me – the more the merrier I told him.
To be honest at the moment my well is a little full. I think might have to rent a reserve well this week.
The knee is holding up, and after some softly softly rehab, I’m back to 75+ mile days in the saddle. So I’ve made the call to get back on my original West Coast route to San Francisco (wahooo!). I hear that Golden Gate Bridge is a callin’ and I cannot wait to meet it…
For those of you who fancy a few more photos – Flickr is up to date here
Until next week – Adios Amigos