” Positively infectious! Anna makes you feel like you’re right alongside her. Honest, humble and so down to earth.” 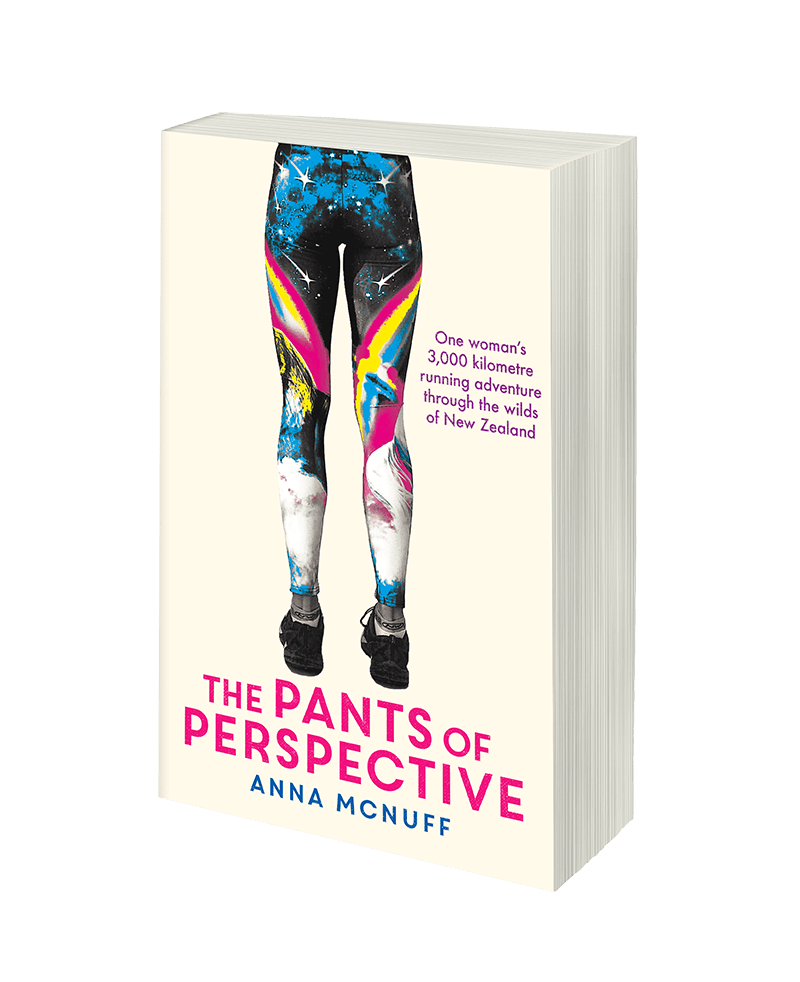 A 3,000 kilometre running adventure through the wilds of New Zealand

Anna was never anything like those ‘real’ runners on telly – all spindly limbs, tiny shorts and split times – but when she read about New Zealand’s 3,000-kilometre-long Te Araroa Trail, she began to wonder… perhaps being a ‘real’ runner was overrated. Maybe she could just run it anyway?

The Pants of Perspective is a witty, colourful and at times painfully raw account of a journey to the edge of what a woman believes herself to be capable of. It is a coming-of-age story which will lead you on a roller coaster ride through fear, vulnerability, courage and failure.

See below for where to order the book. If you’d like an audiobook, you can buy direct from the author (mega thanks).

Also available if you request the book at your local library or indie book store (wahoo!).

“A thrilling, coming-of-age journey that will make you yearn to go on your own adventures.” 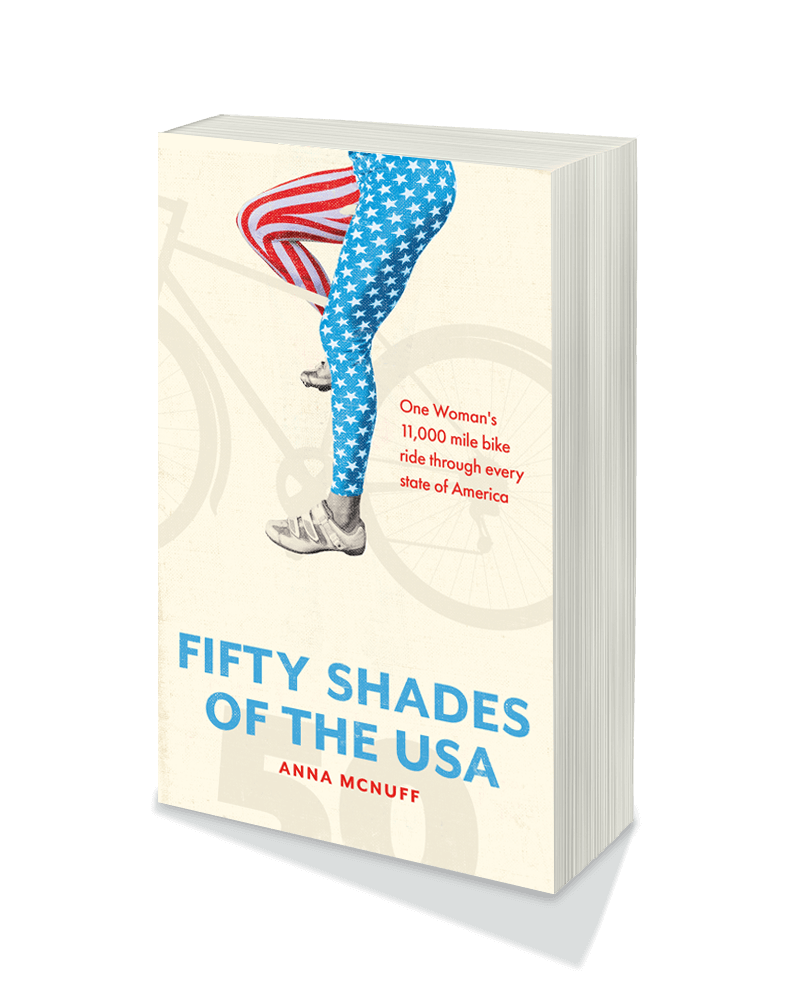 50 Shades Of The USA

A 11,000 mile cycle through every state of America

Disillusioned with corporate London life and with no previous experience as a long-distance cyclist, Anna decides to clamber atop a beautiful pink bicycle (named Boudica) and set out on an 11,000-mile journey on her own, through each and every state of the USA.

Dodging floods, blizzards and electrical storms, she pedals side by side with mustangs of the Wild West, through towering redwood forests, past the snow-capped peaks of the Rocky Mountains and on to the volcanos of Hawaii. Along the way, she meets record-breaking grandmas, sings with Al Green at a gospel service and does her best to avoid becoming a grizzly bear’s dinner.

See below for where to order the book. If you’d like an audiobook, you can buy direct from the author (mega thanks).

Also available if you request the book at your local library or indie book store (wahoo!).

“I love the way Anna writes about her adventures. Her style is super fun and also natural, and she beautifully describes the details. What I do wish is that this book was longer. If there’s ever a “director’s cut” version released which is twice the length of this one, I’d read it! ” 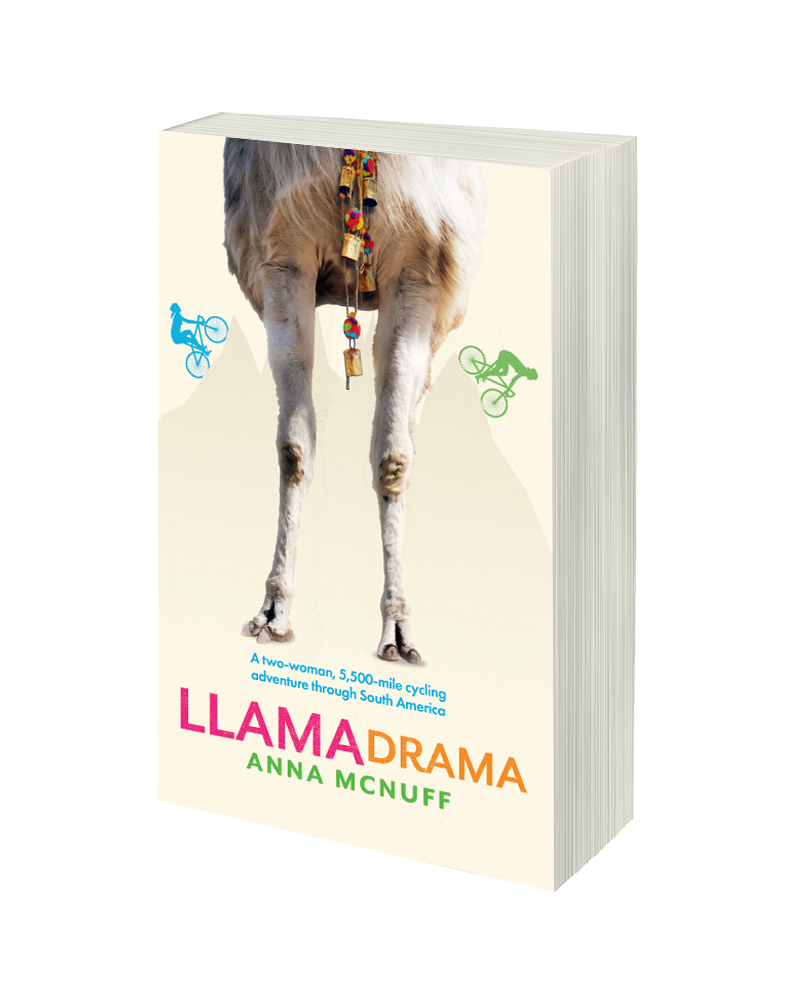 Why take the shortest, most direct route through life, when you could choose the wiggliest, most mountainous one possible?

Armed with a limited grasp of Spanish and determined to meet as many llamas as possible, Anna and her friend Faye set off on a 6-month journey along the spine of the largest mountain range in the world – the Andes.

Beginning in the bustling city of La Paz, the duo pedal south – through dense jungle, across pristine white salt flats and past towering volcanoes, following the path of thundering glacial rivers to the snow-tipped peaks of Patagonia.

Sleeping wild in their tents most nights, they endure 50-mph crosswinds and catastrophic crashes, and go head to head with one very determined saddle sore called Sally. By the time they make it to the southernmost tip of the continent, they have cycled 5,500 miles and ascended over 100,000 metres through the mighty Andes – equivalent to 11 times the height of Everest.

Told from the seat of Anna’s bicycle, Llama Drama is a witty and compelling account of life at its rawest and most rich. For anyone who has ever wanted to journey through the stunning natural landscapes of South America – this story is for you.

See below for where to order the book. If you’d like an audiobook you can buy direct from the author (mega thanks).

Available at most book stores including:

Also available if you request the book at your local library or independent book store (wahoo!).

“This is a book I could not put down – every day was different and Anna carried me through every exciting mile of it. A truly wonderful book that should inspire us all – young and old! ” 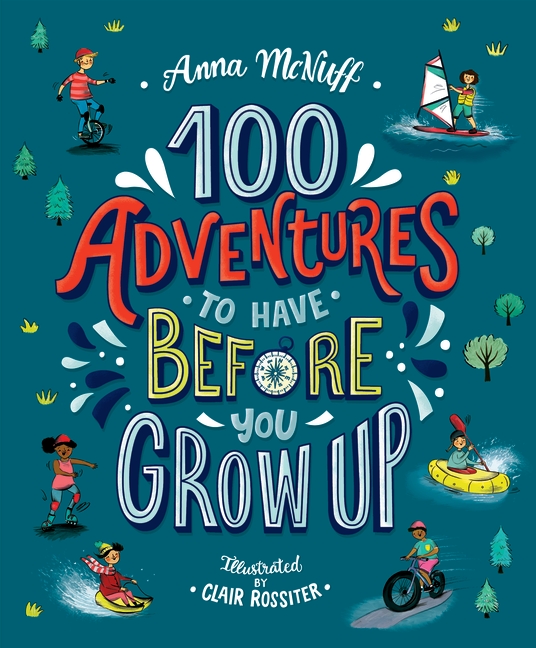 100 Adventures to Have Before You Grow Up.

Discover an adventurous life with this energetic guide packed with 100 ideas, big and small.

From building a secret den, to going on a trail run, stargazing in your back garden, visiting a lighthouse and telling midnight ghost stories, every adventure in these pages will get you fired up think creatively and get exploring. Written by adventurer Anna McNuff, it’s jam-packed with plenty of ideas for adventures at home, as well as an inspiring bucket-list of things to do further afield, when the world is less topsy-turvy. No matter where you live or who you are, this book will encourage everyone to fly by the seat of their adventure pants!

p.s it’s definitely for adults who refuse to grow up too.

See below for where to order the book. Even better if you can buy it from your local independent book store.